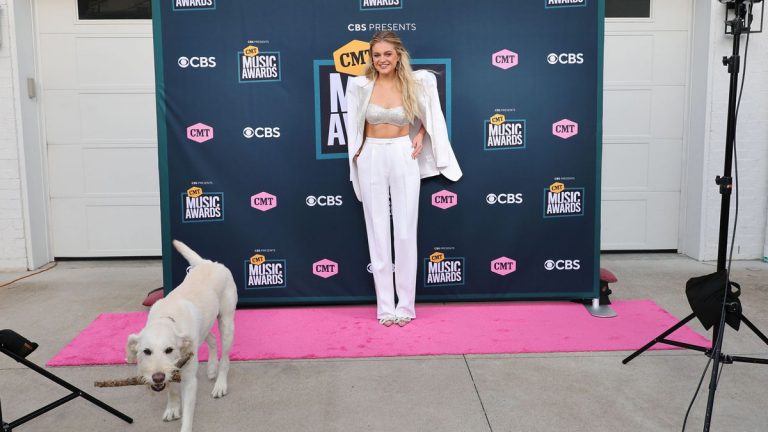 When Kelsea Ballerini fell ill with COVID-19, her country music star husband Morgan Evans quarantined himself to keep others safe as well. On Monday, April 11, Evans witnessed his girl boss wife co-host the 2022 CMT Music Awards from their Tennessee home, and he documented the entire experience on social media.

The singer-songwriter took to TikTok to create the series featuring Ballerini and furry family member, Dibs. The first clip captured the “HEARTFIRST” artist kicking off the CMT Awards in the center of their living room in a striking purple mini-dress.

“Oh, this is just my normal Monday night. Just sitting around in full glam,” she said into a microphone while tuning in remotely. “With really good lighting that I set up myself in my living room, with a satellite truck outside. It’s great. I feel great. It’s great, everything is fine,” she added with a slight chuckle.

As Ballerini tirelessly tackled the gig alongside Kane Brown and Hollywood star Anthony Mackie, Evans kicked back to relax off-camera and cheered on his wife on social media.

“When she tests positive for Covid but still hosts the CMT Music Awards from the living room, and I get to watch from the couch wearing Ugg boots. And even still Dibs is not impressed,” he wrote over a video that showcased Ballerini entertaining.

The first part of the series created quite the stir on the platform, as it garnered 2.6M views and 270.6K likes. The positive fan reaction encouraged the musician to keep up the social sequence, but the country crooner channeled his creative side to elevate part two.
Backstage at the CMT Awards is the “Fan Cam,” where the hottest country music stars answer their listeners’ questions. Instead of the “Fan Cam,” Evans created the “Ugg Cam.”

“From Ugg Cam. She’s still got Covid, and she’s still hosting the CMT Awards from our living room, and Dibs is still not impressed…,” he said over another clip of his wife sporting a St. Jude T-shirt and electric blue trousers.

Towards the end of the show, Evans continued to play his role and documented his wife’s grand finale in pajamas and slippers. The dog mom even received a nod of approval from Dibbs during her award sign-off.

“From the Ugg cam…she did it!!! And he [the dog] did it, through a series of breaks and a persistent display of indifference & boredom. He made it onto the live CBS and CMT broadcasts. It’s a dibs world, folks,” he concluded.

Following the successful show, the multi-platinum artist took to Instagram to share a carousel of photos displaying their make-shift red carpet in their driveway. The two were photographed six feet apart, but he did not hesitate to take advantage of the at-home carpet. Evans posed barefoot in front of the CMT Awards backdrop, chugging a drink and playing with his best pal Dibbs.

“Big mood,” Russell Dickerson pointed out. “Hahaha. How many more days before I can hug you,” gushed Ballerini in the comments.

The good-vibe performance will be included in the CMT Music Awards Extended Cut on April 15 on CMT. The must-watch version will consist of 30 additional minutes and will have extra never-before-seen content.