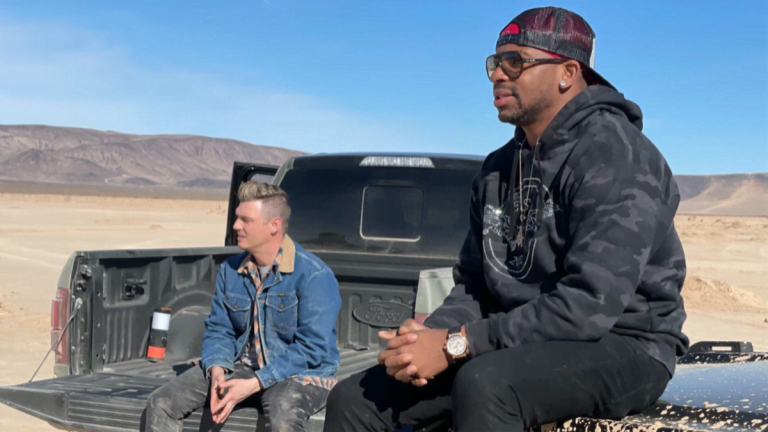 Allen and the Grammy Award winner filmed the music video in the middle of dry lake beds in Nevada. Carter told CMT that he made a family trip out of the experience. He rented multiple RVs, loaded up the dirt bikes and decided to camp overnight.

“The kids were all out there, and everyone was there,” he recalled. “Jimmie showed up the next day,” he added before detailing the action-packed filming process.

Carter explained that he had a clear vision and wanted to capture the picturesque setting. Roew brought a drone to achieve the right desert shots to turn his idea into a reality.

The boy band member turned successful solo artist declared that he broke out his Bronco and Ford Raptor to elevate the music video. While the artists zoomed the trucks around the dusty desert, Carter’s children played in the mud on dirt bikes.

While on set, the “I Got You” singer described an intimate shot featuring his wife and two daughters cuddled up next to a fire to Allen. The idea and the unforgettable experience provoked the breakthrough star to pick up the phone and call his wife, Alexis.

“He must have been feeling it. So, he called up his wife and they made it out there. They are in the video as well,” he added about Jimmie’s tiny family.

Each memorable adventure was documented to develop the high-quality video. While the two chart-topping musicians deliver the soul-touching melody, fans will quickly understand the underlining message to always appreciate the small moments in life with friends and family.

“It’s just such a beautiful and scenic video,” Carter gushed. “It’s just heartfelt, down to earth, and it’s just kind of really chill,” he explained about the overall vibe of the clip.

Carter exclusively told CMT that the day they filmed the music video, was the first time he met Allen in person.

“He’s a writer on the song with me,” he said while also pointing out that Allen penned the second verse. “We just really related when he came to the video shoot. The shoot was really the first time we had ever spent some time together and hung out.”

The pop-culture phenomenon mentioned that they spent four or five hours out in the desert just talking about music and life.

“We were just talking about music, his writing, ideas, and maybe things that he and I could do together,” the star said. “It really was just kind of natural. I was a fan of his music, and I had been listening to his music for quite some time.”

Carter began to rattle off common grounds that assisted in sparking the flame between the two.

In fact, Carter mentioned that Allen reached out for guidance during his time on Season 30 of “DWTS.”

“He called me up when he was on ‘Dancing with the Stars’ to ask for some advice. He’s honestly one of the most down-to-earth and humble people I have ever met in my life. I have been listening to his music for quite some time, and I am just loving it. He’s one of those new progressive country stars,” he stressed about his duet partner.

The cross-over country track “Easy” was released on February 11. Together the two push the boundaries of mainstream country and showcase their raw knack for storytelling.

Nick Carter is gearing up for his state-of-the-art world tour with the Backstreet Boys. “Everybody” wishing they could turn back time to the early 2000s or ‘90s have the chance to purchase tickets and “Get Down” to the classics that turned the Backstreet Boys into global sensations.