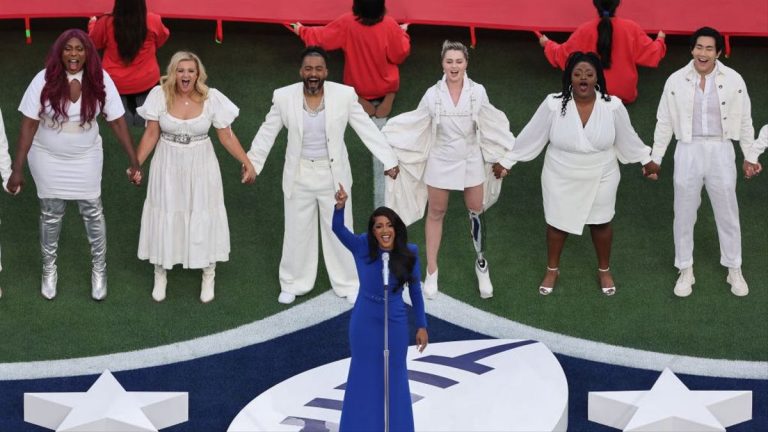 After her stunning performance of “The Star-Spangled Banner” at Super Bowl LVI on Sunday, we already knew that Mickey Guyton was the queen.

However, her Monday morning post about meeting Prince Harry confirmed it.

Guyton shared a snap of herself in a red tracksuit posing with the prince presumably at the Super Bowl where they were both in attendance.

“I met Prince Harry,” Guyton shared. “He was just lovely. I even curtsied in my tracksuit.”

The meeting was just another diamond in her crowning achievement Sunday night – wowing a stadium – and a nation – full of people with her powerful vocals on the National Anthem.

Wearing a royal blue suit that coordinated with the American flag and the NFL logo, Guyton was accompanied by a pianist and a choir, which added drama to her already soulful vocals.

Her performance was paired with footage of U.S. soldiers watching from Kuwait. And just as her voice soared to the peak notes in the song, members of the U.S. Air Force flew jets across the stadium.

“Look at God,” Guyton posted after her much-lauded performance. “None of this would be possible without this incredible group of people and community that surrounds me. Thank you for lifting me up and holding me down. Love you all. 💙