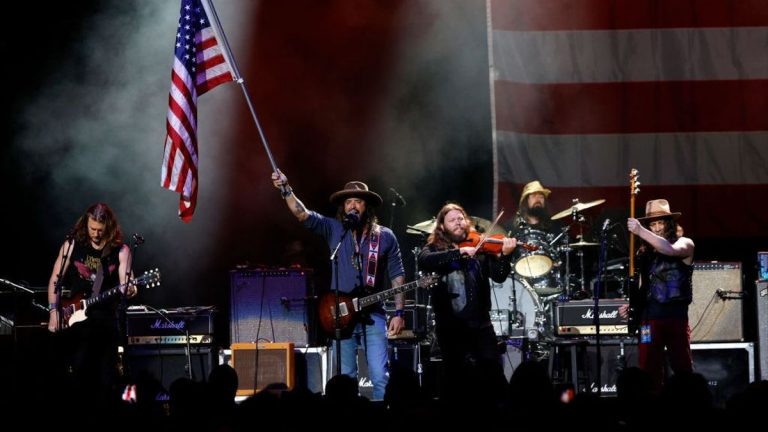 Before Scooter Brown was a country singer in Scooter Brown Band, and his new project War Hippies, he was a Marine on the front lines during the 2003 invasion of Iraq. He knows what war looks like from experience and all of that came rushing back at the end of February when he watched in horror as Russia began its invasion of Ukraine.

Except this time, it was even more personal. A 9-year-old orphan Brown’s family had hosted for several weeks over the Christmas holidays was tucked back into his orphanage in his home country. Brown views the child as family, and there was nothing he could immediately do to protect the child or the dozens of other orphans with whom he lives.

“I just knew that like, as much as you want there to be this idea that civilians won’t be targeted or that they won’t accidentally be in the wrong place at the wrong time, it’s a part of war,” Brown said. “These kids are in our hearts and minds as our kids, even though they aren’t legally our kids. In the moment, they’re part of our family.”

Eventually, everyone made it to safety but not before Brown said he “aged five years in five days” in a Polish hotel room.

On Feb. 24, the same day Russia started its invasion of Ukraine, Brown set up shop in Mount Juliet coffee house Just Love to see how he could utilize his military network to facilitate a rescue – not just of the boy but of all the children.

He sat there for seven hours plotting his trek, lining up resources and figuring out who he could trust to help him. While people he had worked with in Iraq were in Ukraine and willing to step up, he said it was more complicated than orchestrating an escape from Iraq where the U.S. had decades of resources and experience.

Instead of just one rescue effort, he had to plan two. The orphanage’s caretaker who had the children’s paperwork was trapped in a bunker in Kyiv with two kids – an area under heavy assault by Russian forces. To legally get the children out of Ukraine, they needed the paperwork and devised a plan to save the woman and other children, too.

Brown spent seven hours planning at the little table then decided it was “go time.”

“We needed to be over there,” he said. “If (my team) was able to get these kids tomorrow, we’ve gotta be able to meet ’em at the border and take control of ’em.”

The next day, Brown and his friend, Green Beret Andy Lang, flew to Poland. They set up a war room in their hotel. The singer said he couldn’t imagine a blockbuster thriller depicting the level of detail, anxiety and shapeshifting emotions that comprised the next several days.

“The mission was just such an intense moment,” the singer said. “You had a Green Beret and a Marine sitting alone in a hotel room, at one point looking away from each other, trying not to cry in front of each other.”

“I was just like, ’If I have to get a car myself and drive it into the fricking country and get these kids, that’s what I’m willing to do,’” Brown said. “There was a night where my partner, Andy, had to talk me off of the ledge because I was so frustrated, I was packing my stuff, and I said, ’Let’s go.’ He said, ’Where are we going? I said, ’We’re gonna get a car, and we’re gonna go get ’em ourselves.’”

“I asked Andy to come with me because I knew that he had the mentality to make fast decisions and to keep me from doing stupid stuff,” Brown said. “He was such an intricate part of the success of the mission. I’ve got a lot of contacts as a Marine, but when you get into the Special Forces community, it’s an entirely different group of people with a much larger network.”

The mission involved about 30 people from multiple countries – including Aerial Recovery Group along with Matt Murphy and Operation Light Shine, a Nashville-based organization that fights human trafficking and child sexual exploitation. Murphy told WKRN News 2 they contacted a taxi driver willing to drive into the rocket attacks to save the woman and children from the bunker.

“We called it Operation Grandma’s House because we literally took them to these ladies’ grandmother’s house about two hours south of the city,” he said.

Brown had another team on the ground in Ukraine to take the kids from the orphanage. However, before his team arrived, the orphanage located a school bus, loaded up the kids took off towards Poland. Brown was fine because, he said, he just wanted the kids to be safe, and that was the fastest way to get them out of harm’s way.

The singer said he was tracking the bus’ location, and as soon as the kids were aboard and moving, he started to relax. At the same time, Brown’s wife flew to Poland to join him so they could greet the children together.

They convened at a McDonald’s about 30 miles over the Ukrainian border in Poland. Brown and his wife bought hamburgers for the entire bus of passengers. He said the children hadn’t eaten in days at that point and only had the clothes they were wearing. But Little B, the nickname Brown uses for the 9-year-old boy, darted off the bus and into the singer’s arms.

“It was just emotional,” Brown said, explaining the child calls him Pops. “I’m trying not to cry. He’s like, ’Pops! Pops! Pops!’ He just holds my hand walking all the way into McDonald’s. He told all of his friends and all the people there at the orphanage about his Pops. He was just proud to show me off.”

Brown said the decision to go after ’Little B’ was no different from saving one of his children.

“Would I just sit here in America and hope for the best?” he said. “No, I’m gonna go there. I’m gonna figure it out.”

While the singer is back in the United States now, he plans to return to visit “Little B” in the coming weeks. Brown promises there will be a “part two.”