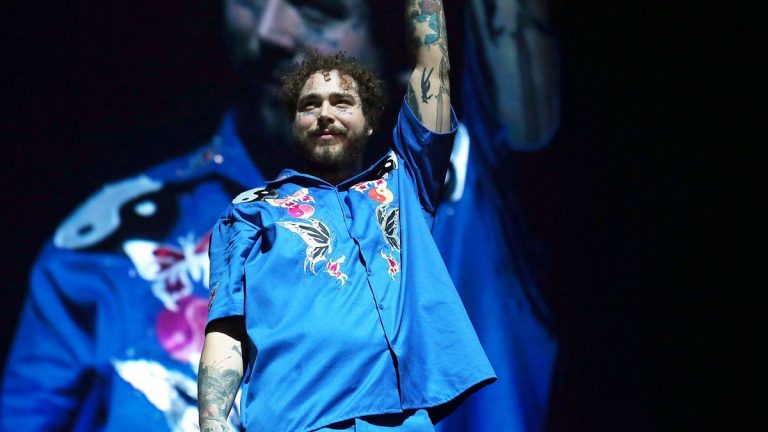 While he did not walk away with any hardware from the prestigious evening, he jumped back on the road to continue his spring headlining tour. During his stop at The Observatory in Southern California, Strings surprised fans with a 25-song set and called Malone up to perform for the sold-out crowd.

With an acoustic guitar wrapped around his tattooed-covered neck, a draft beer, and cigarette in hand, the “Congratulations” singer entered side stage ready to flex his country sound.

“Saw this guy lurking around backstage,” Strings said while pointing to Malone. “Figured we gotta drag him up here to f–kin’ sing for you.”

With the roaring audience standing before them, Malone dubbed Strings’ as the “best” in the bluegrass space.

“Billy Strings is the best to ever f–king do it,” he uttered. “Thanks for having me out, we’re doing a Johnny Cash song,” he added before taking the lead on the 1968 folk song.

Strings displayed his extraordinary guitar skills, as Malone took a shot at the dark and provocative lyrics of the murder ballad.

Early one mornin’ while makin’ the rounds | I took a shot of cocaine, and I shot my woman down | I went right home, and I went to bed | I stuck that lovin’ .44 beneath my head |Got up next mornin’, and I grabbed that gun | Took a shot of cocaine and away I run |Made a good run, but I ran too slow |They overtook me down in Juarez Mexico,” Malone sang while proving he’s a country crooner at heart alongside a traditional banjo and cello.

This was not the first time the chart-topping rapper showed off his twang, as he is known for tackling country covers. For instance, he shared a remarkable rendition of Brad Paisley’s “I’m Gonna Miss Her (The Fishin’ Song)” during a virtual benefit concert organized by Matthew McConaughey in 2021. In 2018 he delivered an acoustic version of Hank Williams Jr.’s “There’s A Tear In My Beer” and Bob Dylan’s “Don’t Think Twice, It’s All Right” in 2013. His love for the honk tonk genre is so strong, that he even played an April fool’s joke on his fans about recording a double country album with Dwight Yoakam.

Thanks @postmalone for the hospitality tonight…and for putting on a great show…and for introducing me to your mom. pic.twitter.com/oi5YTdinQ9

While the musician might not be producing a country record anytime soon, he still rubs elbows with A-listers in the genre. In 2019 he performed alongside Keith Urban and introduced Carrie Underwood to his mother backstage at a live show before the pandemic. Strings and the New York native became close friends in 2020, and they always tend to document their time together.

Malone is set to drop his shortest album to date, “twelve carat toothache” next month, and Strings will wrap up his must-see tour in May at the legendary Ryman Auditorium in Nashville. Tickets to see the breakout artist are still available for purchase, here.