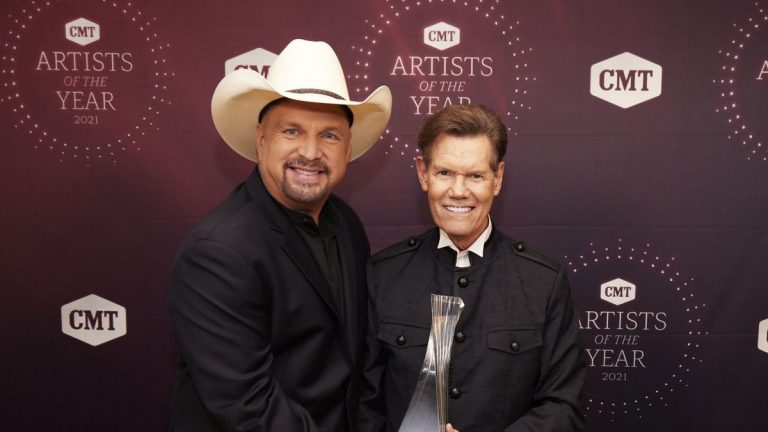 CMT honored country music icon Randy Travis with the Artist of a Lifetime award presented by Ram Trucks. Garth Brooks presented the honor during October 13th’s live Artists of the Year broadcast. “If you’re like me, you pray that another Randy Travis [type talent] shows up every day,” noted the “Friends In Low Places” singer.

As well, 2021 CMT Artists of the Year honoree Kane Brown paid tribute to the star by performing his legendary 2002 hit “Three Wooden Crosses,” and started the performance by celebrating how Travis was, “such a good role model for [up and coming] artists.”

Travis’ inspiration on the next generation of artists also includes singer/songwriter Jon Pardi. Pardi performed Travis’ legendary songs “On The Other Hand,” and 1987 hit, “Forever and Ever, Amen,” at a tribute leading into the ceremony.

The performance, shot at the Nashville Palace where Travis worked as a line cook in his early days in Music City, became the perfect backdrop for a surprise visit from the legendary country singer, who was noted as a huge inspiration to Pardi. Just before the meeting, in an interview with CMT, Pardi stated, “Yeah, it’s full-circle, cause I grew up listening to Randy Travis, my grandma loved Randy Travis, and now here I am honoring him for his big achievement, and CMT is giving him Artist of a Lifetime. I think [it’s] really cool to be a part of that.” He continued, “Randy definitely influences me.”

.@JonPardi is rarely speechless 😲 We surprised Jon with an appearance by #CMTAOTY Artist of a Lifetime honoree (and one of Jon’s personal heroes) @RandyTravis. pic.twitter.com/SITBzngph7

While discussing the impact of Randy Travis’ career upon his country music aspirations to CMT, Jon Pardi related a story about the iconic Texas crooner’s legendary 1987 song that he performed. “[“Forever and Ever, Amen”] launched Randy Travis into this megastar, and it was a huge song. It played at like every wedding, and I can only wonder how many weddings he got invited to sing [at] and, in my career I have ’Head Over Boots,’ which [has] that kind of feel, like, you know, falling in love and, talks about getting married and it [also] plays at all kinds of weddings.”