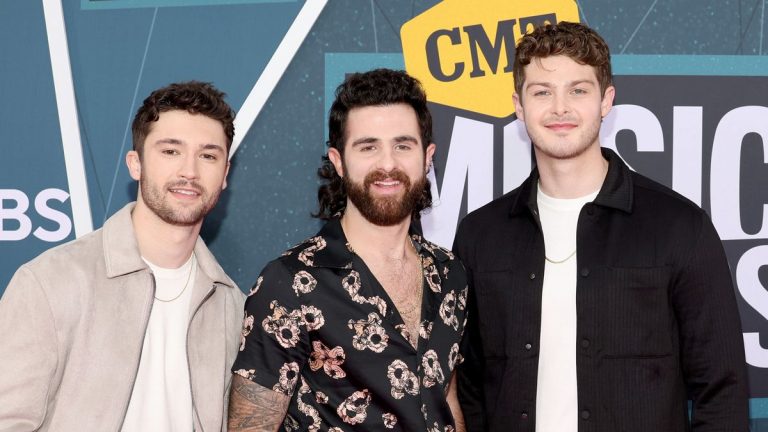 For nearly a decade, the men of Restless Road have been striving to get their music career off the ground. When Zach Beeken, Colton Pack, and Garrett Nichols first stepped into the country music scene – they were faced with several naysayers who believed they would never reach success as a male-dominated trio. However, longtime friend Kane Brown knew all along that they were destined for greatness.

When the “One Mississippi” singer launched his label 1021 Entertainment with Sony Music Nashville, he immediately turned to Restless Road and offered them a record deal. It was early 2020 when their music dream became a reality.

“We had a lot of producers and labels say, ’Hey, you can’t have more than one singer…that’s never gonna work out.’ We’ve had to put in a lot of work on our harmonies, our sound, and we started teaching ourselves about songwriting,” shared Beeken. “When we started working with Kane, he was really someone who helped validate us. We could be a band where we all three sing, and he supported that. He was really the first person in our career that supported us and our vision.”

The harmony-driven trio quickly found success on TikTok with 2.2M followers, simply proving that there was a demand for a boy band in the country music space. Since becoming a signed group, they released their self-titled debut EP, received their first radio single with “Growing Old With You,” made an appearance on ABC’s “The Bachelor,” performed at the Grand Ole Opry, and had the opportunity to join Brown on his Blessed & Free Tour.

While many musicians find themselves caught up in the journey to stardom, Restless Road told CMT that they recently had their first “pinch-me moment” and took the time to recognize their progress as a group.

“The first show we ever did back as a band was at the sold-out show at the Staples Center with Kane. I remember when we came back off the stage, we all went into the dressing room, and I think we had that pinch-me moment,” shared Pack. “We all just looked at each other, and I think we realized then that the stars aligned. We couldn’t have done it without each other. This kind of business is pretty tough, and it’s really tiring, a lot of work, but it makes it a whole lot more fun when you have a couple of people around you that believe in the same thing you’re doing. Where we’re at today is definitely the happiest in our career, because we’re further now than we’ve ever been.”

The rising stars said they will not be pumping their breaks any time soon and will be keeping up the positive momentum on their first headlining Bar Friends Tour. The trio tapped husband-wife duo Kat & Alex and budding vocalist Shelby Darrall to serve as direct support on the nationwide trek. The “Hometown Tonight” singers revealed that they would like to intertwine everything they learned from Brown into their own show.

“We are taking what we learned with our time with Kane and applying some of that stuff and seeing what happens. Kane does a really good job of keeping everybody engaged from start to finish of the show. Whether it’s with his big hits or songs that are just on the album. The whole acoustic moments that he does, where he breaks down and tells you a little bit of the backstory on him, I think that’s something that we want to implement in our show,” gushed Nichols. “We want people to have fun! It’s a big energy show, but we want to take those moments during the show to really just tell who we are, what our story is, and hope that people leave knowing us a little bit better,” he added.

While ticket-holders could expect to hear Restless Road jams like “It Ain’t Easy,” “All the Girls,” “One Step Ahead” – they might just catch some unreleased tracks as well.

“We’re trying out a bunch of new songs and new things in our set,” they declared. “We’ve been writing a bunch of songs when we were off the Road. We are starting to get a really good group of stuff together. We are going into the studio soon and recording new material to give to our fans. We’re going to take time to play all the Restless Road songs everybody knows and loves already, but we’re also going to play songs that we grew up with and that we love.”

The group said that their new music in the pipeline is fresh and different from anything else they have released before.

“We definitely are going to implement some new sounds. There’s one song that we are going to be putting out that’s kind of rootsy and a throwback feel – it’s really cool with our harmonies, and it kind of feels like an American song. I don’t think you’ll hear any love songs or true ballads from us, at least for the next few songs, because we want “Growing Old With You” to live on its own for a while,” Pack said before Beeken revealed that their forthcoming summer single, “No Can Do” will be arriving soon.

“We got a really great song coming out for lake days for these summer days coming up. It’s a beer-drinking song we played at our live shows, and it’s so much fun. I’m really excited about that one too. I think that people are probably biting at the bit now to hear some new music from us, and it is coming.”

While testing new music out on a live audience, they will also be lending a helping hand to aspiring musicians in each city. Along with Kat & Alex and Darrall, Restless Road has invited up-and-coming artists at each stop to showcase their pipes in their very own backyard.

“In the spirit of Mr. Kane Brown, we were talking about how grateful and cool it’s been that he’s given us such a massive opportunity and support. We wanted to give back to other musicians that needed an opportunity because that’s what Kane did for us. We figured we’re in a position to help or give people a platform, and we should do it,” Pack said.

Once they wrap up their 17-city trek in May, they are set to bring their talents across the world to Australia.