Rhett Akins Reveals What It Was Like Hearing Son Thomas Rhett on The Radio: “I Was So Nervous” 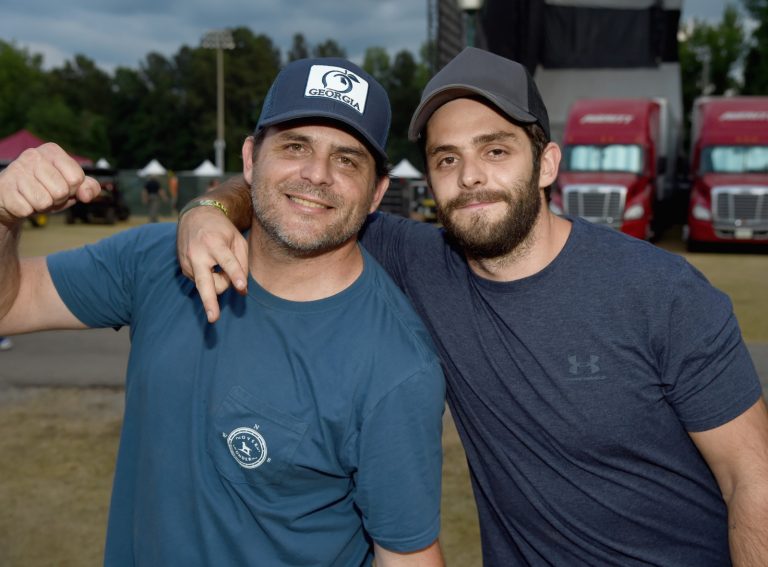 Country music legend Rhett Akins recently appeared on his son’s new show, “Where We Started Radio with Thomas Rhett,” on Apple Music Country as a guest. Throughout the first episode, the proud father pointed out what it was like to watch Thomas Rhett rise to fame and articulated how he felt when he heard his son on the radio for the very first time.

While the two recalled memorable moments, the 52-year-old hitmaker told his superstar son that he was caught off guard when he first heard the radio personality introduce his single, “It Goes Like This.”

“I’ll never forget Bobby Bones premiering it on his show, and I was in my truck. That’s when I still lived in Hendersonville. And he goes, ’Coming up next, we got the brand new one from Thomas Rhett, ’It Goes Like This,’ and I literally pulled over on the side of the road and almost threw up,” Rhett Akins revealed about the hit he also had writing credits on.

Akins shared that he was consumed with a wave of emotions and instantly felt a weight on his shoulders.

“Because I was like, ’If Thomas Rhett fails in this business, I don’t want it to be because of me. I don’t want my song to be the one that killed the career here.’ So I was so nervous when it came on,” he mentioned according to People.

The critically acclaimed singer-songwriter continued to reflect on the early years of Rhett’s music career and detailed what it was like watching his devoted fan base grow.

“I remember going to see you when you were still playing like little theaters and stuff, and every night the crowd just seemed to get bigger and bigger and know that song a little bit more. Then I knew it was taking off,” he expressed to the “Slow Down Summer” singer. “Yeah, that was definitely a, for me, ’where we started’ moment,” Rhett replied.

As Rhett gears up for the release of his highly anticipated radio show, he exclusively shared with People that his father was the “perfect” first guest.

“No one has had a bigger influence than my dad, which made him the perfect guest for us to launch with,” he said. “Getting to hear his perspective on both of our careers, listening to him share stories I have never heard, and getting to play some of our favorite country songs was just an incredible experience that I will now get to cherish forever,” he concluded.

Country music fans will hear from a wide variety of creatives and A-listers who had a hand in crafting the sixth studio album, “Where We Started.” The multi-platinum artist will be pulling back the curtain and sharing the recording process, highlighting the inspiration behind each tune, and will be reflecting on his growth as a vocalist.

“I think it’s really important to look back at where you began, “Rhett shared with Apple Music. “Because you can’t really be happy about your future until you look back and understand, like, ’Dang, we started with zero.”

The radio show will air every Tuesday on Apple Music Country at 6 p.m. ET.