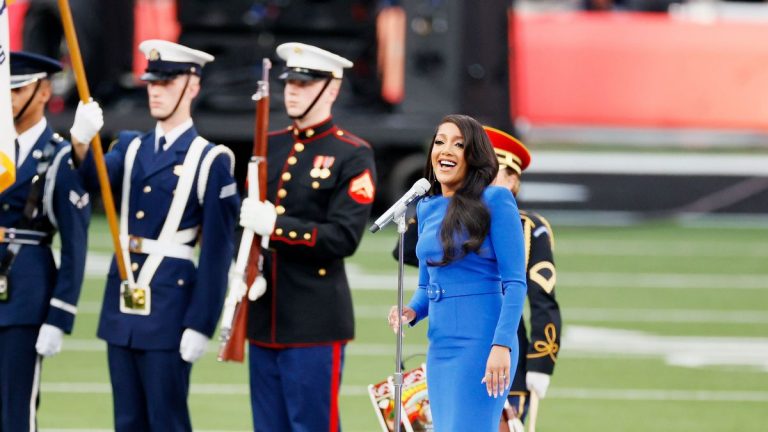 Country music sensation Mickey Guyton stood under the beaming SoFi Stadium lights in Los Angeles and delivered a remarkable rendition of the National Anthem at the 2022 Super Bowl LVI on Sunday, February 13.

Moments before kick-off, Guyton executed a goosebump-provoking performance of the “Star-Spangled Banner” in an electric blue gown that perfectly reflected the Rams’ uniform. With eager football fans cheering in the stands, Guyton captured their attention right from the start with her wide vocal range and jaw-dropping riffs.

The Grammy award-winning artist was accompanied by a grand piano and a powerful choir dressed to the nines in white. Mid-performance, the 10-person gospel ensemble joined in and elevated the anthem with soulful harmonies.

While Guyton gave it her all moments before kick-off, production paired her performance with live footage of the U.S. Arcent Soldiers watching from Camp Arifjan, Kuwait. As she topped the National Anthem with a grand falsetto, the U.S. Air Force Heritage team flew across the stadium – leaving fans to look up into the clear blue skies.

Following her performance, several notable names took to social media to congratulate the artist and to celebrate her achievement.

Wow @MickeyGuyton ! What a way to start the #SuperBowl

“Now the world knows what us in Nashville have known for years. Smashed it, Mickey. @Mickey Guyton #SuperBowl,” gushed Brothers Osborne on Twitter. “Wow @MickeyGuyton! What a way to start the #SuperBowl,” Reese Witherspoon said, praising the 1 minute and 50 seconds rendition.

The show-stopping performance does not come as a surprise, as the hitmaker has been gearing up for the career-altering moment. In fact, her main priority was to encourage unity in the country.

“I set my intentions with singing the national anthem. I was like, ‘OK, togetherness is what I really want,’” she told the New York Post. “So, I felt the way that people would feel togetherness is if I had a choir, with people that I believe represent America. And, you know, I have everybody from my black queen to a redneck cowboy to a girl that has one leg in this choir. And that’s the American that I’m proud of – us all standing together. We all belong,” she concluded.

As Guyton represents the country genre on one of the biggest stages in the world, she is also sharing the star-studded moment with other black musicians who have left an impact on the entertainment industry. Kendrick Lamar, Dr. Dre, Snoop Dogg, and Mary J. Blige are set to dominate the Pepsi Super Bowl LVI Halftime Show.