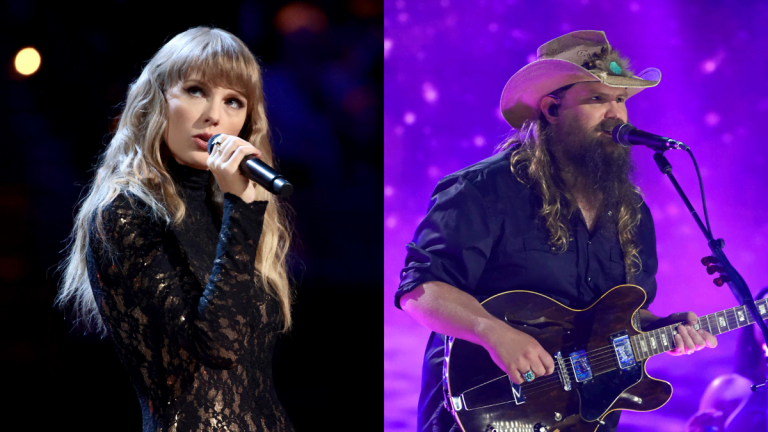 Taylor Swift’s re-recordings of her albums have seen her work with a myriad of country superstars to re-imagine many of her most beloved hits, album tracks, and “vaulted,” unreleased tracks. Chris Stapleton — the soulful country superstar who recently won four CMA Awards — has been enlisted by Swift to sing on her recently re-released 2012 album Red (Taylor’s Version) track “I Bet You Think About Me.”

Stapleton provides harmonies and background vocals on “I Bet You Think About Me,” a pensive, country ballad about a fame-obsessed Beverly Hills-born ex-beau. Swift’s songwriting is smooth yet scathing, too. Songs with bigger hooks, broader, and less inherently “country” sounds, plus more broadly appealing songwriting like “We Are Never Ever Getting Back Together” and “I Knew You Were Trouble” made the final cut on the album’s first release. Now, under her piloting, steel guitars, fiddles — and yes, Chris Stapleton, too — appear. As a result, the album’s overall sound takes a deeper, more personal, overall turn.

“Scared not to be hip, scared to get old / Chasing make-believe status / Last time you felt free / Was when none of that s— mattered / ’Cause you were with me / But now that we’re done and it’s over / I bet it’s hard to believe / But it turned out I’m harder to forget / Than I was to leave,” Swift sings.

Stapleton joins Phoebe Bridgers and Ed Sheeran as guests on the project, which also notably features an extended, 10-minute long take on the heartbreak anthem “All Too Well.” Regarding it, she noted in 2020, “I was like a broken human walking into rehearsal, just feeling terrible about what was going on in my personal life. I walked in…[and] I ended up playing four chords over and over again, and the band started kicking it…I think they could tell I was really going through it.”