Thomas Rhett Recalls What It Was Like Taking All Four Daughters Out On A Date: “It’s Absolute Chaos” 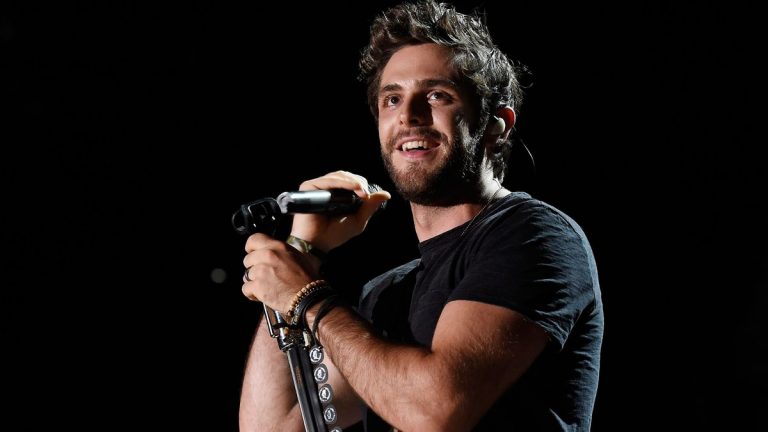 Country music hitmaker Thomas Rhett is patting himself on the back, as his parenting skills were recently put to the test during a fun-filled day with his four young girls.

The “Angels” singer caught up with Big Machine Label Group on March 20 to dish on his rewarding date day with his daughters – Willa Gray (6), Ada James (4), Lennon Love (2), and Lillie Carolina (4 months).

“I took all four to Chick-fil-A the other day,” the proud girl dad told BMLG. “That was an act of God because any time that you’re with an infant – not that every kid is not as important – but when you are literally strollering an infant into a restaurant, the other three are kinda like, ’Hey, I hope I’ve taught you enough to where you don’t sprint into the street, and you’re holding somebody’s hand, and we don’t start throwing french fries in Chick-fil-A.”

While the multi-platinum artist thought it was a difficult task to manage the children alone, he counts the trip to the fast-food restaurant as a small win.

“I think those are the moments that I think I’ll remember vividly when I’m like 55 or 60 years old because I often don’t volunteer to take all four of them at the same time because it’s absolute chaos,” he said while acknowledging his parenting dynamic with wife Lauren Akins.

Rhett believes he is slowly gaining brownie points from his children after each daring and solo adventure. Most importantly, he hopes his children recognize his self-confidence and understand that they could place their trust within him.

“It is fun cause I like for my kids to look at me and trust me,” the star said to his label. “And be like, ’Oh, he can do this.’ ’Cause I think kids can tell when you feel like you can’t do something. So, having the confidence to be able to take them to the mall or take ’em out to eat or whatever, is always really fun for me to get to do, but also like an act of God,” he concluded.

When the award-winning musician is not loading his children into his truck with car seats and strollers, he goes the extra mile to entertain his little ones at home. Late February, Rhett shared a video of his two oldest chasing him around the house with toy baseball bats on social media.

“People ask me all the time what it’s like having 4 kids…,” he wrote on Instagram alongside the energetic clip.

Rhett has been documenting special daddy-daughter moments more than ever, as he also shared a photo of his pick-up truck picnic with Willa Gray and Ada James. The chart-topping artist even allowed Willa to turn his brown lushes locks orange.

In Spring of 2021, the singer-songwriter released his 11-song project, “Country Again: Side A.” The record included several family-oriented tracks such as, “To The Guys That Date My Girls” and “Country Again.” Now, the country sensation is gearing up for his sixth studio album, “Where We Started.”

“They’re some of my favorite songs that I’ve ever been a part of. I’m just enjoying life so much right now, getting to be a dad, collaborating with incredible artists, playing shows with my friends, and watching people smile from the stage,” said Rhett in a previous statement about his forthcoming collection.

To prepare for the raw record, fans can tune into the hitmaker’s new show, “Where We Started Radio with Thomas Rhett,” on Apple Music Country.