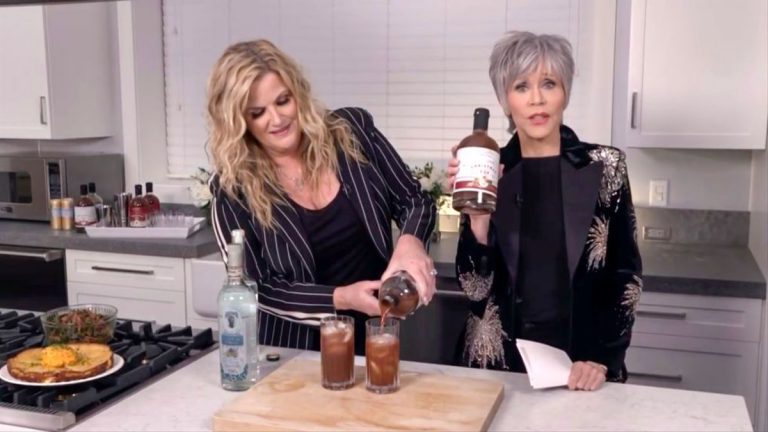 Thanksgiving is about three weeks away, and Trisha Yearwood has a whole new book of (mostly) easy recipes to help with planning the perfect holiday feast – or just a family breakfast.

“Trisha’s Kitchen: Easy Comfort Food for Friends & Family” is out now. And while there’s not a traditional roasted bird in the book (she’s done that already), there’s decadence ranging from lobster mac and cheese and ricotta tartlets to chocolate gravy and breakfast lasagna. For dessert, she’s offering wild muscadine pie with peanut butter sauce, fruitcake bars, and brownies of the double-stuffed and potato chip bacon variety.

“I think this is my favorite book so far,” said Yearwood, who hosts her cooking show “Trisha’s Southern Kitchen” at 11 a.m. Saturdays on The Food Network. “There are things in here that we are already making all the time. And obviously, since there were five years between books, there’s things I’ve been making for the last five years.”

The “She’s In Love with the Boy” singer wrote the cookbook – her fourth – during lockdown, and she did it almost entirely by herself. Because she lived with it every day, she said she’s very attached to it, and she can’t wait for people to start making the food.

“Coming up with new things that are not new is hard,” she said. “A lot of these things will have a twist on things that I grew up on.”

One of her favorite recipes – a chicken pot pie burger – was inspired by her mother’s chicken pot pie. The recipe calls for ground chicken, celery, shallots, carrots, peas and lightly toasted buns.

“I’m telling you, it’s like one of our favorite things,” she said of the burgers. “It feels like we’ve been making it for 25 years.”

The recipes are inspired by food her family ate and loved on their travels over the years. She found more of her grandmother’s recipes that she didn’t know existed. And other recipes came from family and friends. Yearwood didn’t grow up eating chocolate gravy, but her college roommate did. When she tried it for the first time, Yearwood said her reaction was, “Why don’t we eat this on everything?”

The double stuffed brownies came from Yearwood’s desire to recreate Oreo filling. Breakfast lasagna, which is bacon and sausage layered between lasagna noodles and cheese, was Yearwood’s husband Garth Brooks’ idea. Lobster mac and cheese was inspired by their daughters’ favorite room service dish when Brooks played The Wynn in Las Vegas.

“Trisha’s Kitchen” also has an entire chapter on preserves, pickles, sauces, and spreads – a first for any of Yearwood’s books.

“My dad had a really good barbecue sauce that we always used to make, but I never had enough stuff for a whole chapter,” she said. “I’m sitting here staring at some peach jelly my sister and I made. It’s a new territory for me, and it’s kind of amazing.”

But don’t expect to see jars of her sweet and smoky hot sauce on store shelves anytime soon. Yearwood said she wants the flavors to be perfect before that happens, which is challenging to accomplish in mass production.

In the meantime, home chefs can follow the simple recipes and whip it up themselves.

“Most things in the book are really, really easy,” she said. “That’s the goal for me because I want people to make the food. I don’t want it to just be on a shelf, and that’s a pretty book that you never cook out of – I want you to make the stuff that’s in it.”