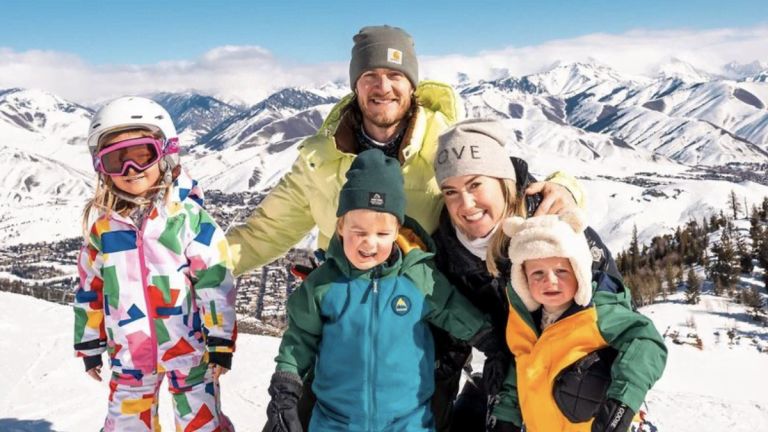 Tyler Hubbard and his family have caught the travel bug, as they are always spotted in a different destination.

Recently, the hitmaker’s wife Haley took to Instagram to share the reality behind their luxury getaways and what it is like to jet-set with three young children.

The supermom uploaded a six-photo carousel on Instagram, showcasing the long journey from Los Angeles to Nashville. One snapshot features the “Cruise” singer tucked away in the corner of an airport with his children, the family crammed on a tight flight with their golden retriever, and another photo displaying their little one casually holding a pair of underwear in public.

“We got home to Nashville yesterday, and this was part of our journey. Atlas was carrying around the underwear he found in my purse and from our mask mishap (see Tyler’s Instagram if you didn’t already), and the last pic was my personal proud moment in the bathroom stall juggling all the beings just before Luca opened the door prematurely,” she wrote in the caption.

She continued to point out her furry family member,”And then of course, there’s Harley, who was the ultimate trooper and loves to get so tiny on the airplane, just thankful he gets to come along! Sad to leave sunny LA but happy to be home sweet home!” she added.

Hayley Hubbard typically shares picture-perfect family portraits on social media. Within the last few months, she revealed memories from their trip to Disneyland, ski adventures in Idaho, and even dream-like prints from Italy.

The recent dysfunctional post sparked a conversation among mothers on Instagram, and several acknowledged Hayley for being authentic and relatable.

“#momlife. I love that you share the realness to your family life. It makes it so relatable for women to see that mom life can be challenging and hard but also rewarding, and it is ok to have a not-so-perfect day as long as you are doing your best,” a follower explained. “Traveling with kids is a superpower for sure!! Making good memories is what it is all about,” shared another one.

Days before Hayley shared the behind-the-scenes Instagram, her award-winning husband documented the hilarious predicament involving the bright yellow undies that her son later used as a toy.

On Tuesday (March 29), Hubbard exposed a video of him and his wife using undergarments as face masks in an Uber.

“I can’t believe we forgot our mask,” Hubbard said in the clip while laughing. “So, we had to get creative here to get into the Uber. Luckily we just went shopping for underwear.”

The multi-platinum artist did not hesitate to mention that he was pleasantly surprised by the high quality of the undergarments. Notable names in Nashville like Lindsay Ell, Chris Lane, and Raelynn praised them both for thinking on their feet.

“Gotta get creative sometimes. This is honestly the softest mask I’ve ever worn. Shout out @alo for the airbrush invisible thong,” he said below the video that garnered over 26K likes.

Tyler Hubbard and his family made it back to Nashville just in time for the release of Thomas Rhett’s sixth studio album, “Where We Started.” On Rhett’s sobering single, “Death Row,” Hubbard appears alongside Russell Dickerson. The thought-provoking track is out now and available to stream everywhere.