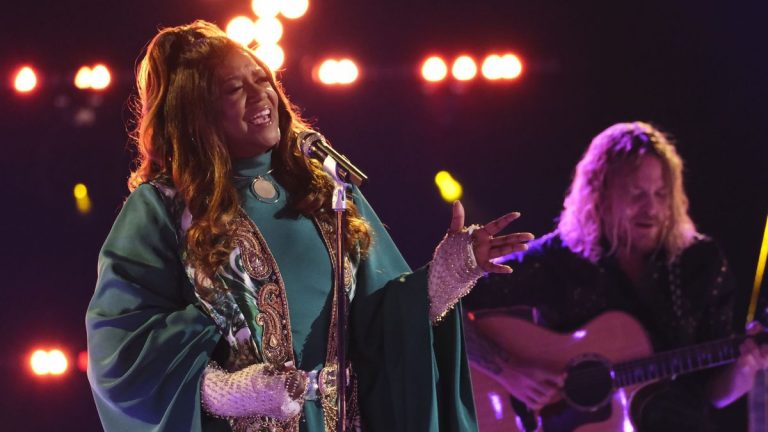 “The Voice” Top 10 finalist Wendy Moten told viewers she was, “okay,” last week after suffering a dramatic fall on stage. It turns out, she was wrong.

Moten was back on Monday night’s episode of “The Voice” to sing Dolly Parton’s “Jolene,” – with both of her arms in casts.

The Nashville-based Time Jumpers singer said she broke her right elbow and fractured her left wrist when she tumbled over the speaker following her performance with coach Blake Shelton and his team.

After the show, she had to go to the hospital.

“I fell down pretty hard,” she said but later added, “the show must go on.”

Shelton told Moten, “there truly is no holding you back.”

“Just promise me that you won’t break both your legs,” he added.

“I ain’t breaking nothing!” she shot back. “You might have to wheel me out on a wheelchair, get me up to sing, put me back and wheel me back out.”

She held her right arm still and close to her body as she delivered a haunting, mournful version of Parton’s “Jolene” that left the judges raving.

“First of all, I know what your week has been like because I asked, and kudos to you for even being on this stage right now and getting this done because you know what it costs, and you know what you want, and it’s worth it,” Kelly Clarkson said. “To come out here as if nothing happened to you, and you’re perfectly fine, and to tell a story like that in such a sorrowful way. It was so beautifully sad, which is like my favorite kind of music. So, well done!”

Shelton added: “By the way, America, I’ve never seen a better example of strength and perseverance and fearlessness standing on this stage, not losing focus on what she came here to do, which is to win this thing!”

“The Voice” airs at 7 p.m. CT Mondays and Tuesdays on NBC.