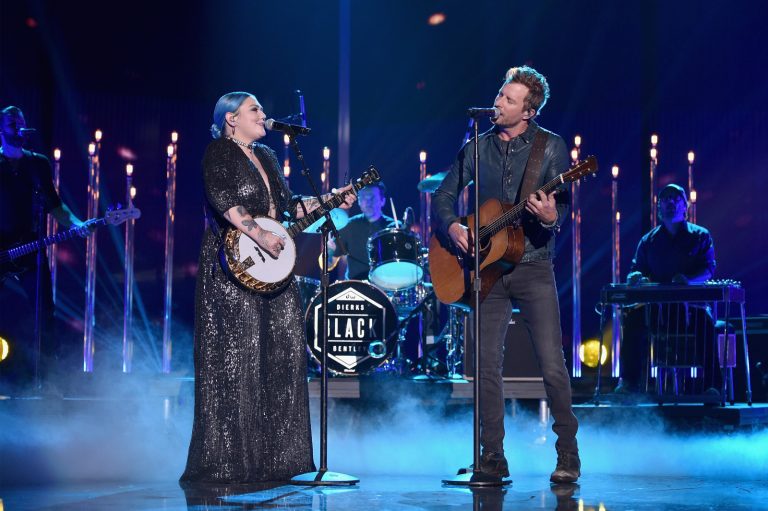 Country-rock hitmaker Elle King made a quick stop at the Ryman Auditorium on Monday night (Feb. 28) in Nashville and surprised her sold-out crowd with an unreleased track featuring Dierks Bentley.

With a high-energy audience sitting before her, the chart-topping artist invited Bentley out on stage to help break the news that they have been working on a duet together called, “Worth a Shot.”

“Dierks, I love you,” King gushed to the country crooner under the spotlight. “I love you. I mean it,” he replied before the “Ex’s & Oh’s” singer addressed her devoted fans about the forthcoming project.

“Actually, this is a really exciting thing, because…we have something cool to tell you guys,” King said. “We have a new song together, everybody.”

Without any hesitation, King took the lead and tackled the first verse. Bentley effortlessly joined in on the catchy chorus, and together they created earworthy harmonies. As Bentley continued to wow concert-goers with the second mid-tempo verse, King joined the band and flexed her acoustic guitar skills.

“One shot from the top of the shelf | Maybe two, what the hell | ’Cause we’ve been on the rocks,” the two sing. “One shot may be all that we got |I don’t know ’bout you but I think it’s worth a shot …”

The unreleased single is about a couple struggling to rekindle the spark they once had for each other. Throughout the relatable melody, King and Bentley toy with different options on how to rebuild their romantic connection.

Following the performance, Bentley took to Instagram on Tuesday, March 1, to share his gratitude and love for his duet partner.

“Jumped up on stage with my buddy @elleking at the Ryman last night! So fun to debut a new song we have together…love you Elle!,” he wrote under a photo of the two joining forces.

Country music fanatics not in attendance on Monday evening, instantly flooded the comment section to show their bottled-up excitement.

“She is the bomb❤️. You two make awesome music together 🎶💯❤️,” shared a social media user. “Two amazing artists together again?! Yes please!! Can’t wait to hear the new song🔥 🙌,” another one added.

This is not the first time the two have worked closely together, as they released “Different For Girls” back in 2016. The beat-driven duet currently lives on Dierks Bentley’s eighth studio album, “Black.”

During the show at the legendary Ryman Auditorium in downtown Nashville, King left fans in disbelief when she called country sensation Miranda Lambert up to perform their platinum anthem, “Drunk (And I Don’t Wanna Go Home)“. She also pulled Ashley McBryde from the audience to take a shot at Charlie Daniels Band’s smash hit “Long Haired Country Boy.”

King recently kicked off her state-of-the-art tour on February 15 in San Diego, California, and is set to complete her run on March 28 at The Fonda Theatre in Los Angeles. Following her headlining tour, the beloved songstress will be joining Chris Stapleton on his All-American Road Show come April.