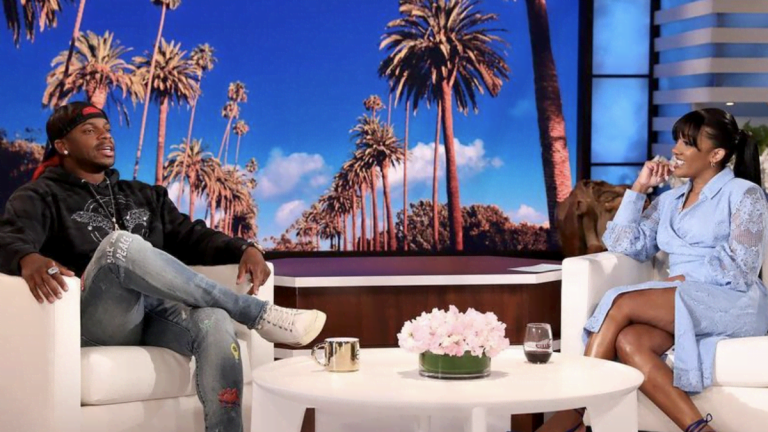 When legendary comedian Ellen DeGeneres takes time off from her daytime show, she calls in country music hitmakers to keep her energetic live audience on their toes and engaged.

Thursday, March 3, Mickey Guyton stepped in as host for the TV personality on “The Ellen DeGeneres Show.” With a glass of red wine in hand, the four-time Grammy nominee surprised fans by inviting her industry friend, Jimmie Allen out to the stage.

Once the two got comfortable in the iconic white chairs – Guyton confessed her love for Allen and revealed that she appreciates his endless support, as he has always been an advocate for women in country music. After Allen discussed why supporting females in any occupation “is important,” Guyton sparked a conversation around his first Grammy nomination and about his recent experience on “Dancing with the Stars.”

The “Good Times Roll” singer shared that he was in New York practicing for “Dancing with the Stars” when he first received the career-altering news via Facetime. The hitmaker told Guyton that he was stunned to hear that he was nominated for the prestigious accolade and that it took time to process.

“A Grammy is something that can never get taken away. Win or lose, you have to say ‘Grammy-nominated,” he added before Guyton chimed in to put the honor into perspective. “Grammy-nominated Jimmie Allen,” she said while displaying the nice ‘ring’ next to his name.

The breakout star continued to express his appreciation for his team and declared that he “wouldn’t be here” without their hard work and dedication behind the scenes.

“You start thinking about everything you sacrificed and worked hard for to get to that moment,” he said. “Then, you think about all the people on your team that worked hard and sacrificed with you. It is literally a group thing,” he added. Guyton first-hand pointed out that it “takes a village” to achieve a Grammy nomination and that Allen is finally receiving the recognition that he deserves.

Following the heartwarming discussion about his career milestone, Guyton requested Allen to bust a move that he learned on “Dancing with the Stars.” Without any hesitation, the platinum artist stood up and displayed his “best” cha-cha – the style of dance that ended his time on the show.

He explained that he ran into several obstacles while competing and revealed that it was “not easy.” Despite the hardships on the dance floor, he said he was shocked by how far his moves brought him in the contest.

“Listen…I was just trying to make it to Disney Week because I’m a huge Disney fan,” he gushed.

Luckily, Allen and his partner successfully scored a spot on the Disney week lineup and performed a Captain Hook-inspired routine. However, Allen told Guyton that he was disappointed that the judges did not complement his one-handed tricks.

“When the judges said nothing about it, I was like, ‘You worried about my foot. Did you not see this hook?’” he said while laughing and clarifying that his wife gave birth while he was on the show as well.

A precious hospital photo appeared on the big screen behind Guyton and Allen, showcasing how put together his wife looked after delivery. While analyzing the snapshot, the hitmaker confessed that he “leveled up” when the two tied the knot.

“I’m not the best-looking dude. I talk a lot and sing to take the attention off my face,” he jokingly said. “I was like, ‘She’s beautiful. How do I get her not to leave me? If we have a bunch of kids, nobody wants to be a stepdad to eight kids,” he added.

After obsessing over his wife and praising his success on the hit reality show, the two played Ellen’s famous “5 Second Rule” game. During the lighting rounds, he slipped and publicized that his new single, “Down Home,” is on its way and will be available for fans on March 7.

He expressed that the forthcoming track holds a special place in his heart, as he penned it about his late father. In early February, Jimmie Allen kicked off his headlining Down Home Tour. Tickets to see the breakout star live and in person are currently available for purchase.