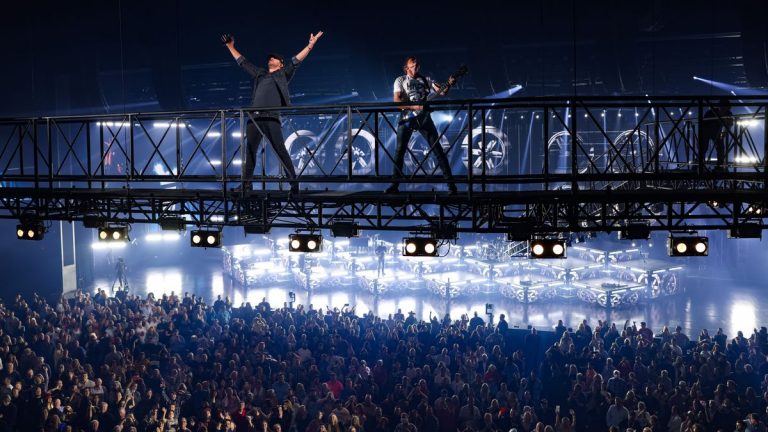 Before Luke Bryan opened his Las Vegas residency, he said the show was just him and his band on an enormous stage with towering screens and extravagant lights. He said there weren’t dancers or other props one would expect in Las Vegas. He planned to rely on energy and hit songs to carry him through the night.

Residencies are often known for their over-the-top elements – or the other end of the spectrum – wholly stripped of production.
The way Bryan talked about it, he planned to bring a very similar show to what fans will see on tour this summer.

But when Bryan’s residency opened at Resorts World Las Vegas Friday night – he delivered the jackpot.

The sold-out crowd was on its feet for two hours of sing-along hits, friendly dialog and endless charisma and energy. Bryan pushed his show over the top with an elaborate stage of more than one dozen shifting cube-shaped pillars, mind-blowing video work reflecting realistic scenes from his 28 No. 1 songs, state-of-the-art lights and lasers and a robotic flying bridge.

If you couldn’t make the trip for Bryan’s Sin City debut, here’s what you missed.

The mask mandate in Las Vegas lifted the day before his residency opened, and the singer was thrilled.
“I’d like to take some personal credit for getting rid of the mask mandate,” Bryan said as his crowd cheered wildly. “I feel like the governor saw that we’re all coming here, and he was like, ’Aw, (stuff) it.’ It happened on my weekend! Shit, yeah! And now you all can knock boots without a mask on out there.”

Bryan launched his show with high octane crowd favorite “That’s My Kind of Night.” He bounded across the mammoth stage singing, slapping fans’ hands, and fist-bumping with the people on the first row. Fog seeped from the floor in front of the 18-wheeler emblazoned with the song’s title on the screen. Band members performed from individual pillars lit to look as if the platforms were rimmed in the diesel truck’s running lights. Bryan flipped his ball cap around backward, spread his feet shoulder-width apart and leaned into the good-time lyrics, bouncing with the beat.

Undeterred by the pandemic, Bryan left the stage and was escorted through the crowd during “All My Friends Say” as red fireworks erupted from the stage.

The room transformed into a tropical retreat of rainbow lights for “One Margarita” before he took a moment to talk to his crowd.
“I’m not really sure how well I will do having a residency in Las Vegas,” Bryan admitted. “I already lost my ass in blackjack, which made me double my NFL bets. Raise your hand if you’re up, you Viagra-taking (butt)holes.”

On a more serious note, he added: “It’s amazing to have a place to play in Las Vegas to call home.”

His beach theme continued with “Sunrise, Sunburn, Sunset,” “Waves” and “Roller Coaster,” during which the impressive screens on the pillars and backdrop transformed the stage into the gigantic framework of a wooden rollercoaster.

He shifted gears then, taking guests to the farm with “What Makes You Country,” “Huntin’, Fishin’ and Lovin’ Every Day,” “Kick the Dust Up” – punctuated by smoke cannons, red lasers and more than one dozen flames firing like torches from the floor and ceiling. He closed the segment with perennial favorite “Rain is a Good Thing.”

“You don’t be screwing up my damn Yelp shit,” he joked with fans. “I don’t want no three stars. I’m working my ass off up here.”

Then he gave fans a gambling lesson about what not to do – and asked him to stop by his merchandise table on the way out and buy his “damn keychains and koozies” to help him make up for the money he lost.

His show included his first medley of No. 1 hits because he realized he now had too many to fit into a single night. “Drunk on You,” “Crash My Party,” “Down to One,” “Someone Else Calling You Baby” and “Kiss Tomorrow Goodbye” were condensed for the sake of time.

A blue grand piano glided onto stage, which prompted him to share the story of how he bought his first piano in Nashville. He said he and Caroline lived in an approximate 900-square-foot house when asked his record label for a piano. He jokes he didn’t realize he had to pay the label back. If he had, he would have borrowed the money from his dad. The piano arrived, and he called his two friends Dave Haywood and Charles Kelley from Lady A to come over and write songs. The first song they penned on his new piano became his first No. 1 hit, “Do I.”

The crowd sang every word. When Bryan brought out his acoustic guitar for “Drink a Beer.”

“Y’all sing with me, Las Vegas,” he prompted. They didn’t have to be told. The audience was filled with people wearing everything from cut-off shorts to sequined dresses, and they all jumped in on the sentimental ballad.

Again, he picked up the pace with “Move,” triggering another staggering round of lasers and pyrotechnics with fire bursting from the stage in multiple directions.

Bryan fittingly ended the central part of his show with “Play It Again” — which he did a couple of minutes later, aided by his expansive, robotic flying bridge in the encore.

The bridge lowered from the ceiling, and a ramp unfurled to the stage, giving Bryan and his band access to the catwalk that stretched the width of the theater. The singer strutted across the bridge, gyrating his hips during “Country Girl (Shake it for Me),” much to the delight of the screaming and dancing audience.

“We’re going all the way to the top!” Bryan told fans, indicating the bridge would lift him eye-level with the upper tier of the multi-level, 5,000 seat theater.

The five-time entertainer of the year closed the show with “I Don’t Want This Night to End” as his band took a bow.