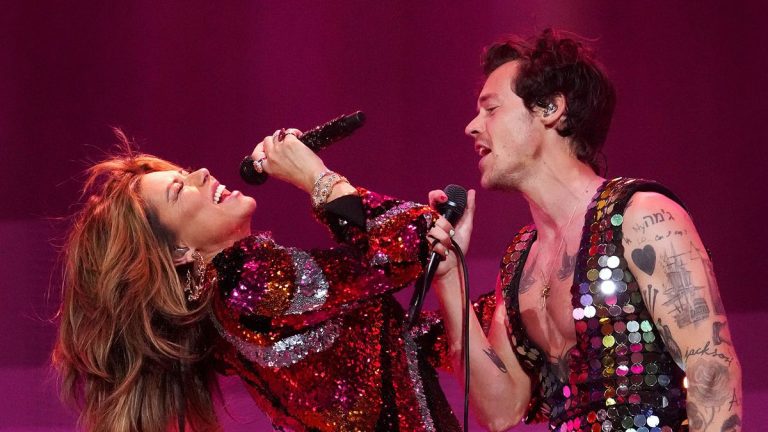 Pop artist Harry Styles made his Coachella debut on Friday evening (April 15) in Indio, California, with a jaw-dropping 18-song set including new music and a special surprise from country legend Shania Twain.

The former One Direction band member performed a solo rendition of “What Makes You Beautiful,” chart-topping tracks “Watermelon Sugar,” “Adore You,” “Carolina,” and lead single “As It Was” from his forthcoming record, “Harry’s House.” Although the hitmaker sang several fan favorites, the standout moment was when Twain joined Styles under the spotlight to sing “Man! I Feel Like A Woman!”

Dressed in a sequence retro dress, the country star belted the first few notes of the iconic song from the top of a massive staircase. The sudden appearance left festival-goers dead in their tracks, as the European heartthrob flawlessly joined in on the singalong-worthy chorus.

While the two dominated the famous Coachella stage, a dance party broke out in the audience, and several fans filmed the memorable moment out of disbelief. Following the unexpected duet, Styles thanked the country star for joining him and revealed that Twain played a vital role in his life growing up.

“Now I have to tell you, in the car with my mother as a child, this lady taught me to sing. She also taught me that men are trash,” he said while laughing. “But to you, for the memories you gave me with my mother, I will be forever grateful,” he added.

With a diamond-encrusted acoustic guitar placed gently on her lap, Twain tried to wrap her head around their show-stopping performance.

“I’m [at a] loss for words, I’m a bit starstruck … when I was writing this song, you were just a kid, so it’s kind of a dream and very surreal to be sitting right here now, singing this song with you,” she said before they serenaded each other with “You’re Still the One” from Twain’s third studio album, “Come On Over.”

The best-selling female country artist ran to Twitter to gush about Styles and the unforgettable collaboration.

“Music icon. Fashion icon. And true friend❤️ I am honored and thrilled to have joined @Harry_Styles onstage for his @coachella debut. What a magical moment!! I mean, c’mon…WHAT A SHOW 🔥 I’m a huge fan! Grateful we got to create this memory together – Thank you Harry,” Twain said.

Music icon. Fashion icon. And true friend ❤️ I am honored and thrilled to have joined @Harry_Styles onstage for his @coachella debut. What a magical moment!! And I mean c’mon… WHAT A SHOW I’m a huge fan! Grateful we got to create this memory together – Thank you Harry. pic.twitter.com/Tl7OpbSOnN

Ticket-holders and country music fanatics instantly responded to the tweet with praise and gratitude.

“I had a full fangirl attack when you emerged from the stage. What a wonderful performance! Thanks @Harry_Styles for inviting her, and thank you, Shania, for saying yes. You two saved the entire year of 2022 last night!” said a fan. “This was one of the moments in music history I will never forget, my two idols performing together,” shared another.

This was not the first time the country-pop legend vocalized her love for Styles. In February, she talked about their mutual passion for fashion and potential collaboration on the Home Now Radio podcast on Apple Music Hits.

“I’m really a big fan of Harry Styles, and he’s apparently a fan of mine as well. He likes to sing ’You’re Still The One,’ and he performs it sometimes in his show, his live show, which is really cool and a huge compliment,” the five-time Grammy award-winner shared. “One thing that I think is really cool that we share is we like to wear leopard print. Leopard print is a Shania Twain signature print, but Harry Styles can borrow it, of course, because he’s so cute and talented. So yeah, you’ve got my permission. Go ahead. Wear it. Just don’t wear it out,” she added while giving the artist her blessing.

After a two-year hiatus due to the Coronavirus pandemic – Coachella came back stronger than ever, with the buzz-worthy duet serving as the unofficial kick-off. The festival just wrapped its first dates in the desert and will be back this upcoming weekend, April 22 to 24. Tickets to the festival are currently available, here.