Watch: The Judds, Ray Charles, Eddie Bayers and Pete Drake are Inducted Into the Country Music Hall of Fame 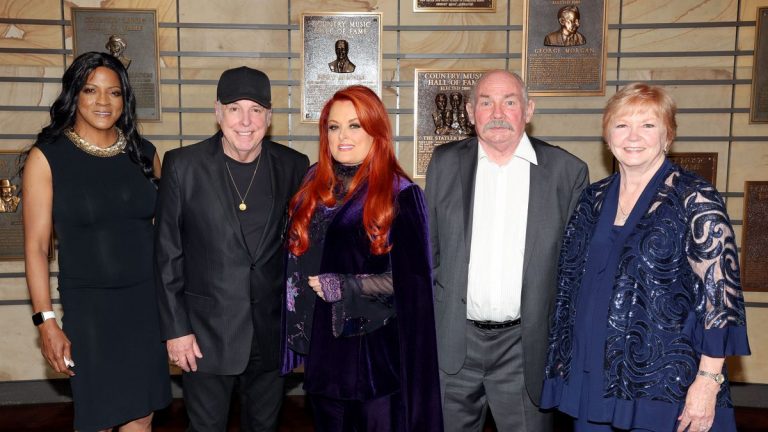 The Country Music Hall of Fame hosted its annual Medallion Ceremony on Sunday at the behest of the Judd family, one day after inductee Naomi Judd unexpectedly passed away.

The formal induction ceremony made The Judds, Eddie Bayers, Ray Charles and Pete Drake the 143rd, 144th, 145th and 146th members of the Country Music Hall of Fame.

Each artist was feted by members of the music community in honor of the lasting contributions they made to country music.

Eddie Bayers was also inducted in the recording and/or touring musician category. Bayers, one of the most sought after, prolific studio drummers in modern country music history, has spent more than four decades recording with artists including The Judds, Kenny Chesney, Ricky Skaggs, George Strait and Alan Jackson.
Trisha Yearwood sang “Walk Away Joe” for Bayers, and Vince Gill stepped with “When I Call Your Name” before also presenting Bayers with his Medallion.

The Judds, comprised of Naomi and Wynonna Judd, were honored in the Modern Era Artist category. Naomi Judd’s daughters – Wynonna Judd and Ashley Judd – said she died of “mental illness” on Saturday but wanted the program to proceed as scheduled. They both attended the emotional evening and cried when Ricky Skaggs presented them with the medallions. Wynonna held hers, and Ashley studied her mothers while tears ran down her face.

“I didn’t prepare anything tonight because I knew mom would probably talk the most,” Wynonna Judd said. “I’m gonna make this fast because my heart’s broken, and I feel so blessed. It’s a very strange dynamic to be this broken and this blessed.” She confirmed she planned to continue her music career.

R&B icon Ray Charles (1930-2004) was inducted in the Veterans Era Artist category. While Charles isn’t known for his work in country music, he was undeniably influential in country music.

In 1962, Charles released his “Modern Sounds in Country and Western Music” which left a lasting mark on the genre and broadened its appeal to a broader audience.

The War and Treaty performed “You Don’t Know Me,” while Country Music Hall of Fame member Garth Brooks sang “Seven Spanish Angels,” and Bettye LaVette reached back for “I Can’t Stop Loving You.”