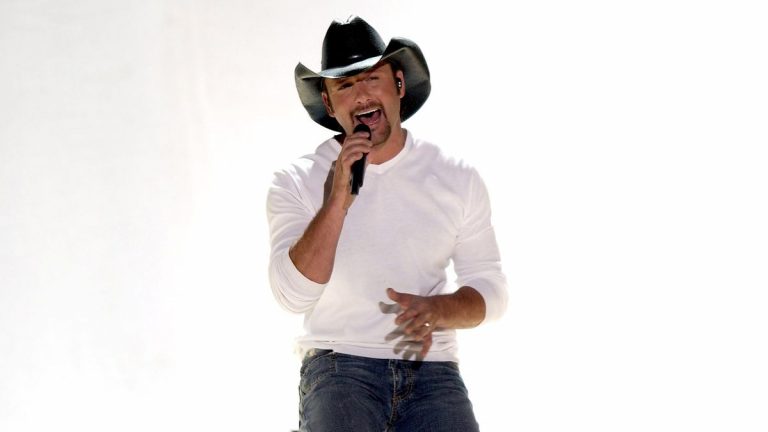 Country music icon Tim McGraw made a guest appearance on The Late Show with Stephen Colbert on Wednesday, Feb. 2, to discuss his role as James Dutton on the hit television series, 1883.

The musician turned Hollywood star revealed what it was like to work in extreme weather conditions with wife and fellow artist Faith Hill, touched upon his personal relationship with Tom Hanks, and even rubbed elbows with Martha Stewart.

Following Colbert’s interview with McGraw, the late-night host knew he couldn’t let the hitmaker leave without hearing his critically acclaimed vocals live and in person. Right before the show cut to a commercial break – Colbert reached beside his desk and said, “I was hoping, would you mind…we have a mic here,” he pointed while continuing to persuade the legend.

“You have been known to sing a tune, and I was wondering if you would be willing to sing something out to break. I know you didn’t come here to sing. You came here to act – but that part is done,” he said.

Without any hesitation, the multi-platinum artist snagged the microphone and asked the house band, “You got this, ‘Tiny Dancer’”

With ease, the ensemble started to play the introduction of Elton John’s chart-topping track, and McGraw instantly demanded the room by simply singing the very first note. The way McGraw intertwined his country twang with John’s respected anthem had Colbert and the band speechless, leaving their eyes to do all the talking.

The Late Show was not the first time the “Highway Don’t Care” singer tackled the anthem, as he has been covering the hit in concert for years and included his own rendition on his 2002 record, Tim McGraw and the Dancehall Doctors. In fact, John and McGraw joined forces in 2003 and opened up the American Music Awards with “Tiny Dancer.”

Before the artist broke out into song, he gushed about his relationship with Tom Hanks and revealed that he was the one who encouraged the A-lister to make a small cameo in the Yellowstone prequel.

When Colbert held up a picture of McGraw and Hank side by side in 1883, the singer quickly smiled and uttered that Tom Hanks is a “cool cat.” Surprisingly, McGraw has had a close connection with Hank and Rita Wilson for quite some time.

.@TheTimMcGraw shares how the cameo from @tomhanks in @1883Official came about. #LSSC https://t.co/bM8rAUX7qP pic.twitter.com/9GGOZEjXoZ

“Their kids and our kids have been family friends for a long time. We have been on vacations together. My middle daughter and their youngest son went to college together. Just great people,” he added before going down a rabbit hole about Hank’s remarkable role.

“This cameo thing came up, and I called Tom and said, ‘Look, I don’t want to put any pressure on you, I know you’re Tom Hanks, and you can do anything you want to do in the world, but If there’s any chance you’d be interested in this cameo,” McGraw continued. “He goes, ‘Tell me when and where, and I’ll be there.’ He showed up, so sweet, he went to everybody on set [and] shook hands, took pictures with everybody. He couldn’t have been nice. It was really special,” he concluded.

Before McGraw stopped by The Late Show, Faith Hill was on the night before (Feb.1) to break down her role as Margaret Dutton.